The villagers had all gathered, and their sad murmurs were only broken by muffled sobs – no one had ever seen the church so full before. The minister took to the pulpit, spread his hands and preached: 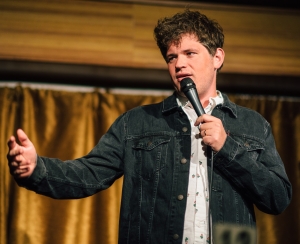 “Michael Joyce was a stand-up comedian and writer in Los Angeles. Born just outside the City of Champions, Cleveland Ohio, his favorite childhood pastime was being first in line at family party buffets.

On any given night you could see Michael perform all over NYC at venues like Comedy at the Knitting Factory, Arlene’s Grocery, and UCB. He’s been featured in the Brooklyn Daily, TimeOut Magazine, the Chicago Tribune’s RedEye, appeared in the Brooklyn Comedy Festival, Laughing Devil Comedy Festival, World Series of Comedy and the Accidental Comedy Fest. Michael has written for fatherly.com and Bleacher Report, and co-produced The Fancy Show, a comedy showcase frequently cited as one of the top shows in NYC.”

The clergyman drew such vivid pictures of Michael’s hilariousness that every soul there broke down into a chorus of anguished weeping, even the preacher himself began crying on the dais.

A moment later the church door creaked and the congregation turned and stared aghast while Michael Joyce walked in! He had been in the bathroom this whole time!

The people threw themselves upon Michael, smothered him with kisses and poured out thanksgivings. Suddenly the minister shouted at the top of his voice: “SING! — and put your hearts in it! MICHAEL JOYCE lives!”